The well being of your employees matters.

The well being of your employees matters.

Our comprehensive set of behavioral health resources helps you recruit, engage and retain happy, healthy and productive employees to improve organizational well being.

Why offer a VITAL WorkLife EAP?

What our clients are saying...

"I continue to share with others how impressive VITAL WorkLife is as an EAP.  After 20+ years in human resources and being a Certified Coach, I have had history with EAP's and this is by far the best!"

Learn About Our Top-Tier EAP Resources

In-the-moment behavioral health support, with a master’s or doctorate level counselor, is available 24/7 to address concerns or immediate needs when they occur.

Counseling is available in either face-to-face or virtual sessions. Counseling involves analyzing, addressing and resolving problems that impact clients emotionally, or are impairing their ability to function well. It provides professional guidance to the client, often spending time exploring the client’s past and exploring emotional turmoil, mental health issues or substance abuse concerns, and looking for links and solutions to issues. Counselors create safe and supportive spaces so that clients explore questions like, ‘who am I,’ 'how do I feel' and ‘how do I cope with this.’ Counselors help identify problems and act as a solid support system to assist clients in gaining strength.

Counseling can help with many concerns, including:

VITAL WorkLife offers unlimited, free and confidential phone consultations with one of our financial counselors to help identify possible causes and solutions to financial problems and discuss many options regarding how to best address financial questions and concerns or manage debt. Areas where we can help include:

Legal Advice: Free advice over the phone, generally within one business day.

Local Referral: In-person referrals available to those who may need to retain an attorney. One free half-hour consultation with a local lawyer is provided and a 25% discount off hourly fees may apply if additional assistance is needed.

VITAL WorkLife offers access to the expert counsel of an attorney to address legal questions or concerns, such as:

Coaching in the areas of career decisions, skill building, goal setting and achievement is available to individuals and their family members.

Click here to learn more about coaching and the differences between coaching vs. counseling ›

VITAL WorkLife offers Nurse Peer Coaching as part of our EAP solution. Nurse Peer Coaching provides confidential, one-on-one, telephonic peer coaching for nurses with a compassionate listener who understands the enormity of the work, life and family challenges they face — and has walked in their shoes. A nurse peer coach can be a confidential and knowledgeable sounding board for discussing concerns, such as:

In addition to being Registered Nurses, our Nurse Peer Coaches are also, teachers, licensed therapists, counselors and coaches. They have extensive clinical experience in a variety of settings allowing them to understand, support and advise nurses in almost any situation.

We don’t wait for the phone to ring.

In their “Survey on the Total Financial Impact of Employee Absences,” Mercer-Kronos found that employee absences can cost an employer the equivalent of 35% of payroll in direct and indirect costs. Other reported impacts included:

So, it’s no surprise that getting employees back to work soon—and productively—is a primary goal for most employers.

That’s why VITAL WorkLife developed a proactive, comprehensive Return to Work Coaching program with the goal of getting employees back to work sooner by taking an integrated approach to the issues and barriers—psychosocial, work-related, financial and more—surrounding the reason for their absence. Once employees return, we address the issues that may cause employees to be distracted and less productive to help prevent additional absences and “presenteeism.”

The program is easy to use and access. All a manager needs to do is explain the program to the employee and obtain a signed release. VITAL WorkLife will assign an experienced Return to Work counselor to the case. Working closely with the employee, the counselor will develop a comprehensive return to work plan that may include:

The counselor remains involved until the employee returns to work, regains productivity or another mutually agreed-upon outcome is achieved.

Return to Work Coaching is included in some VITAL WorkLife EAP plans. Please Contact Us with any questions or for additional information. 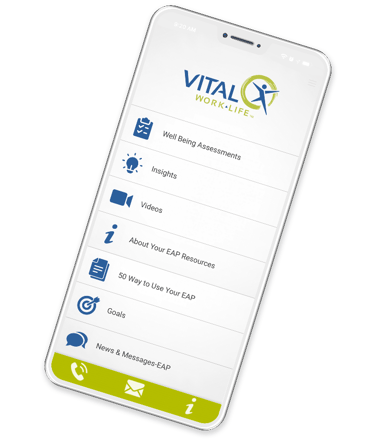 The VITAL WorkLife App is designed to help employees and their families improve their personal and professional lives and to easily access their VITAL WorkLife resources whenever—and wherever—they are needed.

Take Assessments to Evaluate Well Being

The VITAL WorkLife App is available on the App Store and Google Play.

Hundreds of Insights, by well being experts, on a wide range of topics are available on our blog.

An online portal allowing access to detailed benefit information and a wealth of online resources.

Even in the most uncertain of times, the role of a manager remains the same—to support team members. That includes supporting their mental and behavioral health, but at times this can be challenging.

The good news is VITAL WorkLife can be your lifeline for generating ideas on how to start difficult conversations, what to say to decrease high emotions and how to best support employee well being. VITAL WorkLife offers additional resources, 24/7 to assist managers and supervisors in their roles, including:

Our solutions have been tested and improved over time and we have leveraged our expertise to develop a proven process. We apply our proven process to help our clients from discovery through implementation and engagement, using ongoing monitoring and measurement to evaluate and make adjustments to meet program objectives. This includes:

We strive to continually improve our processes and solutions to be the trusted partner clients can count on to support well being for individuals and their organizations. 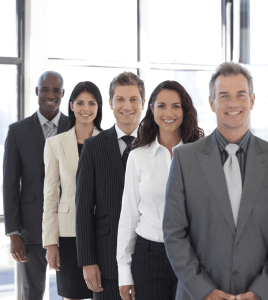 When employees get sick, you expect them to visit their doctor — and you probably provide insurance for that purpose. On the other hand, when your employees are facing emotional, relationship, family, legal or financial problems, what do you do?

At VITAL WorkLife, we also make in-depth behavioral expertise available to your organization’s management and line supervisors in order to help you strengthen your leadership, enhance your work environment and grow your business.

Mental and Behavioral Health Issues: Estimating the Prevalence and Costs

Left undiagnosed and untreated, mental illness has a significant negative impact on workplace productivity. Here are just a few of the statistics:

The Journal of the American Medical Association (JAMA) estimates that as many as 8.4 hours are lost per employee per week as a result of major depression. That’s 26 lost work days per year, versus 17 days for cancer. When depression is effectively treated, absenteeism is reduced 12 days per year.

Additionally, more than one quarter of adults with serious mental illness also had co-occurring substance dependence or abuse in 2009. In 2011, the Centers for Disease Control released a study on the costs of alcohol abuse in 2006. It revealed:

Given the size of the problem, how much can an EAP help? Here’s what studies indicate:

According to research from the Department of Health and Human Resources, companies with EAPs in place have, on average, 21% lower rates of absenteeism and 14% higher productivity rates.

And, in a landmark study, the Northwestern National Life Insurance Company noted, “Providing an Employee Assistance Program is one of the top ten actions an organization can take to reduce the potential for workplace violence.”

In a randomized, controlled trial of its Work and Health Initiative (WHI) program conducted by the State of Maine in 2011, 79 state employees were screened for depression and at-work limitations. Participants who agreed to participate in the 8-week program were provided with multi-component work-focused care that included weekly counseling over the phone.

Findings published in the Journal of Occupational and Environmental Medicine indicate that the WHI program has had moderate to large positive effects on multiple indicators of functioning including:

In addition to having a large effect on depression symptom severity, the WHI has also produced productivity cost savings of $6041.70 per participant annually.

In “The EAP Buyer’s Guide,” created for the Employee Assistance Professionals Association, Donald G. Jorgensen, PhD, CEAP, describes how EAPs have demonstrated their effectiveness at the following companies:

At Caterpillar Inc., the company’s use of intensive case management and EAP intervention:

An Employee Benefit So Smart It Can Pay For Itself

An Employee Assistance Program is a comprehensive set of services designed to help your employees meet life’s challenges face to face — typically involving everything from dealing with depression and stress, to chemical dependency and marital counseling for your employees, to coaching and support for your organization’s managers. Why is that important?

In the more than 35 years since EAPs were first widely introduced, they have more than proven their ability to improve productivity and reduce costs. According to a 2012 survey by Towers Watson, companies with highly effective health and productivity programs report:

In a survey published by the Journal of Occupational and Environmental Medicine in 2012, 67.9% of employers ranked use of EAPs as the most significant program element for their return to work effort.

According to the U.S. Department of Labor, for every dollar that is invested in an EAP, businesses see a return of anywhere from $5 to $16.